Rights and Responsibilities in the Bahá’í Family System 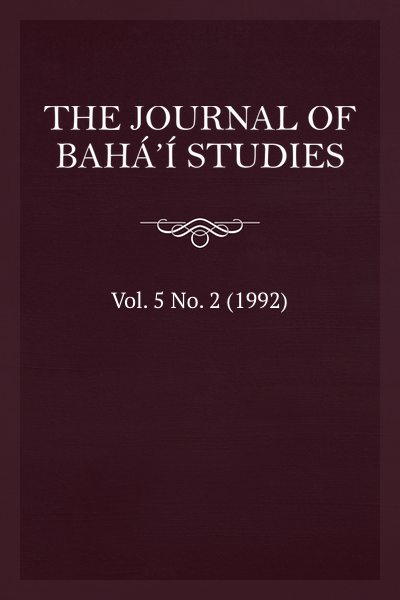 This article discusses the rights and responsibilities ascribed in the Bahá’í teachings to the members of the family. The complementary, rather than identical, functions of women and men are explored. It is asserted that through the application of Bahá’í teachings the institution of marriage and family emerges as a fundamental building block in the development of a new society and global civilization based on equality and unity among its members. The need for the application of the principle of gender equality in the family by focusing on the flexible aspects of gender roles as described in the Bahá’í writings is discussed. The importance of consultation as an instrument for effective communication within the family system is explained and its positive outcome in developing a loving egalitarian environment between and among family members is examined.

Paper presented at the North Central Regional meeting of the Association for Bahá’í Studies, February 3, 1990, University of Minnesota, Minneapolis, Minnesota.

Since July 2012, Professor Hoda Mahmoudi has held The Bahá’í Chair for World Peace at the University of Maryland, College Park. As director of this endowed academic program, Professor Mahmoudi collaborates with a wide range of scholars, researchers, and practitioners to advance interdisciplinary analysis and open discourse on global peace.  She contributes to and promotes sound scientific research on peace that expands knowledge and strategies, and explores the role of individuals and institutions in removing obstacles to peace.

In 2017, Professor Mahmoudi and the Bahá’í Chair for World Peace program received the University of Maryland President’s Commission on Ethnic Minority Issues Annual Award for outstanding work on structural racism. In 2016, Professor Mahmoudi accepted the Outstanding Honors Faculty Award in appreciation for her popular Honors Seminar on “The Problem of Prejudice: Overcoming Impediments to Peace and Justice,” as well as for her symposia on timely topics of interest to the international community, featuring highly renowned guest speakers.

In 2013, Professor Mahmoudi began exploring the research theme, “Structural Racism and the Roots of Prejudice,” by inviting leading race scholars to the University of Maryland to present their work and explore solutions to racism and prejudice. An upcoming edited volume of the related research findings will be published by the University of California Press on the theme of Structural Racism and is coedited by Rashawn Ray and Hoda Mahmoudi.

Empowerment of Women and Peace, Global Governance and Leadership, Human Nature, Overcoming Challenges in the Globalization of the Environment are other research themes that her program explores to promote innovative ideas and strategies for a more peaceful world.

Before joining the University of Maryland faculty, Professor Mahmoudi served as the coordinator of the Research Department at the Bahá’í World Centre in Haifa, Israel from 2001 to 2012.  Prior to that, Dr. Mahmoudi was Dean of the College of Arts and Sciences at Northeastern Illinois University, where she was also a faculty member in the Department of Sociology. Professor Mahmoudi also served as Vice President and Dean of Olivet College, where she was instrumental in a nationally recognized, institutional transformation.

In 2020, Professor Mahmoudi published a co-authored volume with Dr. Janet Khan, A World Without War, which is published by Bahá'í Publishing.