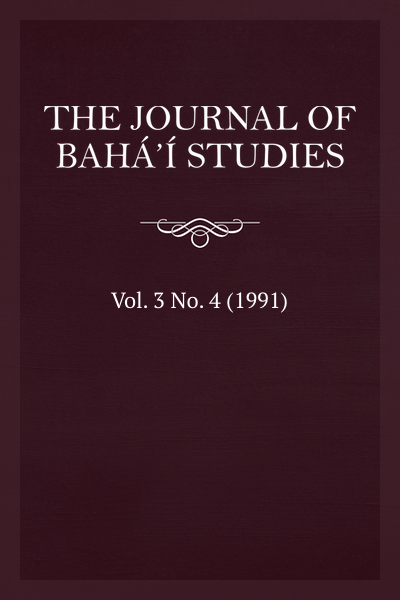 This article will consider the life and work of Áqá Ḥusayn-i-Iṣfahání, called Mishkín-Qalam. Known for his outstanding ability at calligraphy, Mishkín-Qalam was invited to work at the court of the Qájár ruler Náṣiri’d-Dín Sháh during the late 1850s. In the 1860s the artist became caught up in the events surrounding the birth of the Bahá’í Revelation and he moved to Edirne to be near its exiled founder Bahá’u’lláh. Intrigues at the court of the Ottoman Sultan led to the arrest of Mishkín-Qalam and to his subsequent imprisonment in the fortress of Famagusta on the island of Cyprus. The discussion will center on the calligraphic compositions created by Mishkín-Qalam during his stay in Famagusta and also on those done during his last years where he rejoined Bahá’u’lláh in the city of ‘Akká. The roots of his artistic expression in Islamic calligraphic traditions will be considered as well as the extent to which his forms were adapted to proclaim the message of the Bahá’í Faith.

Julie Oeming Badiee (1947-2001) was a professor of art history and chair of the department of art and art history at Western Maryland College in Westminster, Maryland. She earned her PhD in history of art at the University of Michigan with a specialty in Islamic art. Her article "Mark Tobey's City Paintings: Meditations on an Age of Transition" appeared in The Journal of Baha'i Studies, volume 1, number 4.

Heshmatollah Badiee was born in Tehran, Iran, and is director of the audiovisual department of Western Maryland College. He serves on the Baha'i District Teaching Committee of Maryland and Washington, DC, and is currently conducting research on the lives of recent Baha'i martyrs in Iran.