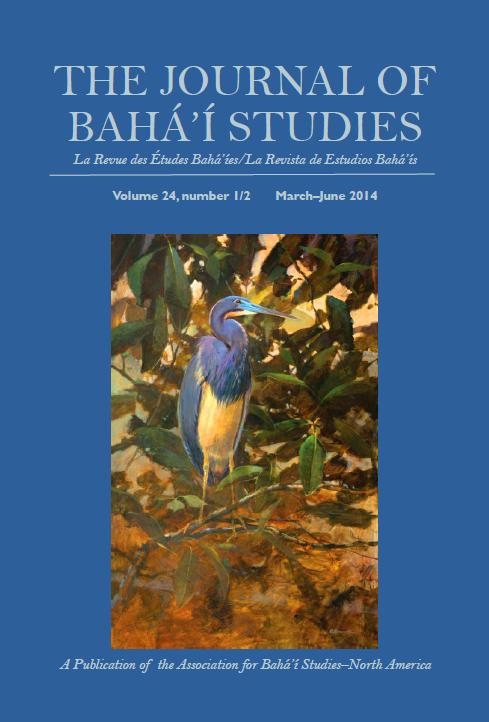 This article explores ‘Abdu’l-Bahá’s orientation toward the Iranian Constitutional Revolution (1906–11) and proposes that, deeply rooted in Bahá’u’lláh’s writings and teachings, His attitude was one of embracing the principles of constitutionalism while disapproving the confrontational nature of the interactions. After investigating some passages in the Bahá’í Writings relevant to the topic and discussing (1) ‘Abdu’l-Bahá’s eff orts to reconcile the
majlis and the court of the Shah while urging Bahá’ís to do the same (or withdraw if unsuccessful); (2) His warnings against foreign interference, the involvement of the ‘ulamá in politics, and the role of Yaḥyáyís in the Revolution; (3) His views on obedience to the government and noninterference in partisan politics; and (4) His concern that the Bahá’ís would be scapegoated if they intervened, this article focuses on His view that real social change needs to start at the moral-ethical level, a corollary of spiritual rejuvenation. The article concludes by examining this view as a guideline for Bahá’í action in times of sociopolitical turmoil as exemplified by the April 2011 letter of the Bahá’ís of Egypt to the people of that country.

Born in Iran, Mina Yazdani was a medical student at Shiraz University when the Islamic Revolution broke out in 1979. She was dismissed from the university, in 1981, during the Cultural Revolution, because of being a Bahá’í. She then studied via correspondence with Indiana University and earned
her BGS. In 2004 She moved to Canada where she received an MA in Religion and Culture from Wilfrid
Laurier University in Waterloo, and subsequently, her PhD from the Department of Near and Middle
Eastern Civilizations at the University of Toronto. Her PhD dissertation is titled “Religious Contentions in Modern Iran, 1881-1941.” She is currently an Assistant Professor of History at Eastern Kentucky University. Among her publications are a monograph dealing with the social history of the Qajar period as well as a number of articles including, “The Confessions of Dolgoruki: Fiction and Masternarrative in
Twentieth-Century Iran,” Iranian Studies, vol. 44, no.1 (January 2011): 25-47.