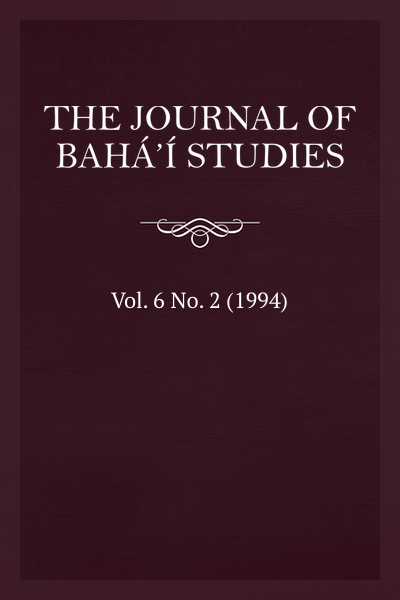 The beginning of the twentieth century saw the emergence in the West of new and revolutionary movements in both literature and religion. Viewing themselves as the harbingers of a new age, these movements frequently found expression in terms of a radical break with the past as well as a resurgence of dormant powers and traditions. Their paths frequently intersected: sometimes in well-publicized confrontations or much-discussed collaborations, just as often through fleeting personal contacts that were little noted by most of the world. This paper examines an example of the latter type of contact, albeit one that has extensive and fascinating ramifications. The event in question is the meeting between Ezra Pound, the famous American modernist poet, and 'Abdu'l-Baha. Investigation of the contact 'Abdu'l-Baha had with Pound reveals links between the Baha'i Faith and a number of important avant-garde circles in the West, and thereby sheds light on hitherto unexplored areas of religious and literary history.

Elham Afnan has recently completed her doctoral thesis on nineteenth- and twentieth-century literary utopias at McMaster University, Hamilton, Canada. She has served in the Archives Office at the Baha'i World Order Studies Program at Landegg Academy in Switzerland. Her article "The Good of the World and the Happiness of the Nations: A Study of Modern Utopian and Dystopian Literature" appeared in The Journal of Baha'i Studies, volume 1, number 4 (1989).